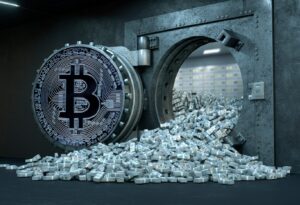 CBDCs could take a major bite out of commercial deposits and jeopardize the industry’s funding, reports say.

Digital currencies backed by central banks might become a preferred safe haven during a future financial crisis, potentially aggravating runs at commercial lenders. That is one possible financial-stability hazard raised in a series of reports by global central banks including the US Federal Reserve, Bank of England, European Central Bank and Swiss National Bank.

During a crisis, a central bank digital currency “could be perceived as a safe haven”, according to the reports published on Thursday by the Bank for International Settlements.

“Evidence from previous systemic bank runs indicate how powerful the impetus of a bank run is, and therefore how the reduced transaction costs of a CBDC [Central Bank Digital Currency] could exacerbate bank runs.”

Central bankers are contemplating adopting their own digital tokens as other cryptocurrencies are surging into the void to establish instant, low-friction international transactions with little or no regulation. China is already developing a digital yuan, which is pressuring others to follow suit.

The central banks’ research also detailed the possible effects on global banking giants, suggesting CBDCs could take a major bite out of commercial deposits and jeopardize the industry’s funding.

Government-backed digital currencies “could lead to higher volatility in deposits and/or a significant, long-term reduction in customer deposits,” according to one of the reports. “This could, under certain circumstances, affect bank profitability, lending and the overall provision of financial services.”

Both of the risks could be managed by forcing tight controls on the CBDCs, the documents suggested. Hard limits on transfers or holdings of the digital currencies could mitigate such dangers, as could a lengthy transition period before launching the new assets. Pricing safeguards, such as uncompetitive interest rates, could also be imposed, according to the reports.

Wall Street and the crypto sector are eagerly awaiting a Fed research paper in coming days that is expected to steer the US conversation over adopting a digital dollar. The Fed contributed to Thursday’s BIS documents, suggesting the issues they outlined may complement the pending US report.