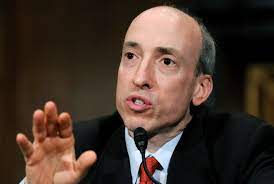 “Follow the money” is a phrase that’s now part of our national lexicon and that’s exactly what the Security and Exchange Commission will do.  The frenzied trading in meme stocks and the speculation in cryptocurrencies appear to have landed in the crosshairs of the new chief of the SEC.

Gary Gensler, the SEC chairman, has not said explicitly that the regulator is targeting any particular company or product. But in comments this week he has begun laying down markers on these issues.

At a conference earlier this week, Gensler said that the agency was looking at how an increasing proportion of trading occurs off exchanges, on platforms run by high-frequency traders. Nearly every major brokerage firm in the U.S. now routes orders to these market-makers and receives a portion of the money that they earn on the spread between bid and ask prices.

The system, known as payment for order flow, helps brokers make enough money on the back-end so they can more easily charge zero commissions for trades. But the deals between the brokers and the market-makers are opaque, and the SEC chief wants to open it to more sunlight — and possibly change the rules. Gensler said he has asked SEC staff to “enhance and update” rules around market structure that could affect big players like Citadel Securities and Virtu Financial (ticker: VIRT).

Gensler notes that countries including Canada and Australia have banned payment for order flow. In addition, “even in Europe they find it to be an inherent conflict between best execution and these payments,” he said.

Some brokers, like Robinhood, rely on payment for order flow for a particularly large portion of their revenue as compared with their peers. And last year, the SEC found that Robinhood had been cutting deals for years with market makers that were bad for their customers — so bad, in fact, that they often outweighed the benefit those customers got from not paying a commission on trades. Robinhood neither admitted nor denied the claims and said it has changed its practices in regards to payment for order flow. The SEC allegations covered the years 2015 to 2018.

Asked about zero-commission apps this week, Gensler said “It’s not free trading,” given the money that brokers make on payment for order flow.