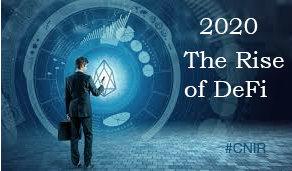 2020 will no doubt be remembered by many who are alive today as the pandemic year. For the crypto community, though, it will go down as the year that decentralized finance (DeFi) projects entered the limelight, with the promise of revamping traditional finance systems.

Whether that promise will be fulfilled is a question that only time will answer. But there is no doubt who the biggest winner of the DeFi bubble is, Ethereum.

Although DeFi protocols like MakerDao existed since 2017, it was only until this year that the value of ETH locked into these protocols reached record numbers. At the time of writing, over $4.5 billion is locked in DeFi protocols. Maker leads the way, with lending protocol, Compound trailing not far behind.

Ethereum-based decentralized exchanges, such as UniSwap have also recorded all-time high transaction volumes that momentarily surpassed that of tier-one crypto exchanges like Poloniex, Gemini, and Binance.US.

A large number of DeFi transactions also have seen daily Ethereum transaction volumes hitting the same levels as the 2017 bull run. The price of ETH lagged initially but has surged in recent weeks too, to levels last seen at the start of that explosive run to over $1000.

But, what about Ethereum’s competitors, or so-called “Ethereum-killers”? Following Ethereum’s launch, designing a platform that allowed developers to build decentralized applications and host smart contracts appeared as the hottest niche in the blockchain space.

Many projects emerged notably including TRON, VeChain, and Cardano. The main promise was to deliver faster transaction times and build enterprise-ready and scalable blockchain platforms.

Despite these advances though, it appears that competing blockchain platforms will still trail Ethereum in what is now the latest hottest niche in the industry. Once again, the trailing folks, although promising faster settlements will have to adapt or even evolve to stand a chance of remaining relevant.

Unsurprisingly, Tron Foundation CEO, Justin Sun has recently spoken about the TRON network developing DeFi capabilities in a bid to replicate Ethereum’s success. He reportedly said at a Binance-hosted conference:

“Tron is also trying to build all these types of decentralized products on top of Tron, and soon we will see decentralized lending, derivatives, and decentralized BTC on the Tron platform.”

Meanwhile, IOHK’s Charles Hoskinson had also hinted at the project developing DeFi capabilities. In a tweet response, he argued that Cardano’s recent migration to Proof-of-Stake (PoS), means that the platform would be more suited to DeFi-based projects in the future.

Smart contracts and Native assets are coming this year, our latency is lower than ethereum’s- the dominant DeFi platform (hydra brings it to subsecond) to quote satoshi: I’m sorry, I dont have the time to explain it to you. https://t.co/aej1MS06cz

Therefore, as we’ll wait for time to reveal with the DeFi drama is a mere bubble or not, another story to keep an eye on would be how Ethereum’s competitors will fare at the DeFi party, even though it already seems they’ve arrived late.