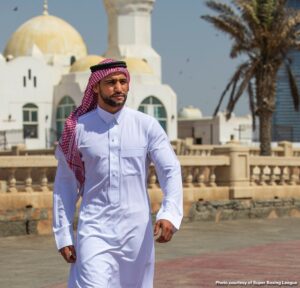 Kahn is a British professional boxer, promoter and philanthropist. He is a former unified light-welterweight world champion, having held the WBA title from 2009 to 2012, and the IBF title in 2011.

The high-profile event will feature the World’s leading crypto traders meeting in the ring and all funds generated from the big night that includes an auction of various crypto related assets, collectibles and NFT digital art  will be donated to the vital humanitarian work undertaken by the Amir Khan Foundation.

The SBL works in unity with the Amir Khan foundation which was set-up by two-time World Boxing Champion & Olympic Silver Medalist Amir Khan with the core objective to support communities globally, especially through health, fitness, and sport. Since its inception, the Amir Khan Foundation has responded to global emergencies and facilitated developmental projects across the world. The foundation exists to support individuals, families and communities globally, and to offer relief and support during times of hardship, urgent need and upheaval.

The star-studded evening will showcase Dubai as the future of Block Chain technology and innovation, with the World’s fastest-growing crypto community in attendance on fight night.